This is a packet of bees.

So, as a complete update, I have my two hives installed. One is doing better than the other but they are both coming along with capped brood and honey present in both hives.

This time I decided, since I had all the equipment, to buy packages of bees rather than nucs. Nucs are basically a mini hive with five frames of honey and brood, bees and an active queen. Packages are simply the bees and the queen. Unlike the nuc, the package’s queen and her new subjects are not formally introduced yet, and this can cause you some problems.  The queen and her retinue come in a separate container. 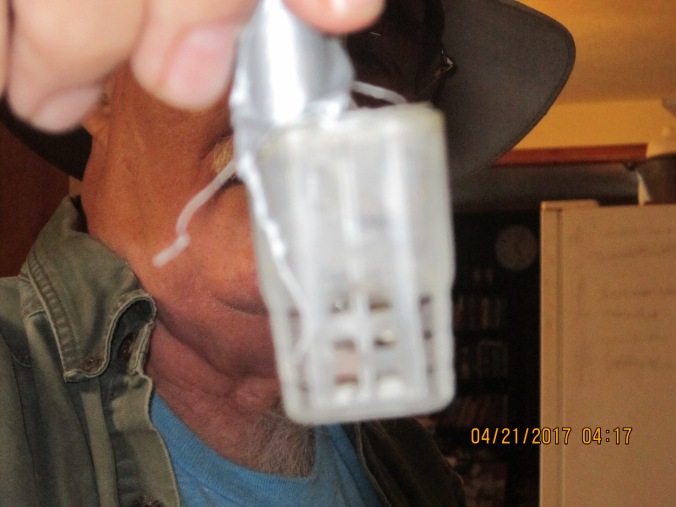 A queen container with queen and her attendants.

So we rode over to Chillicothe, Missouri to see Bill and Tammie and pick up our bees. We decided to go in the car and we loaded two packages of bees in the back seat. Would you like to know what will make you a defensive driver? Knowing that, if you break those boxes, you are going to get REALLY busy.

Arriving home we pulled the bees out and looked at them. Here is a look at one of the boxes as seen from above where you take the bees out of.

Top view of the bee packet.

So here is the trick, I need to get all those bees, the queen and her attendants in a hive without causing major disruption, losing bees (especially the queen) or getting stung.

Step one, the queen: The queen in her little container, is supposed to hang down between the middle frames. There is “queen candy” in one end, which she and her attendants are supposed to eat out, and then the queen should emerge to a grand meeting by her new subjects. Hopefully.

An alternative method is to tape up this hole and hand release the queen about five days after you set up the new hive. I decided, on good advice, to try that. I will tell you the outcome later.

Next, I set up the lower hive bodies and got the hanging feeders ready. We used 4 lbs of sugar to 1 gallon of water. This is the mixture that best stimulates comb making.

The black thing with two holes in it to the right of the picture is a feeder.

So I set up the two lower hive bodies as shown in the picture above. Please note, almost dead center between the third and fourth frame counting from the left the plastic queen container. They either love her or hate her, hard to say. To that I added another empty hive body. Shaking bees into a hive body is not as easy as it may at first seem and it never sounded that easy to me in the first place. I try to treat the girls like ladies you know.

So I took some advice from Bill George and set them up like this: 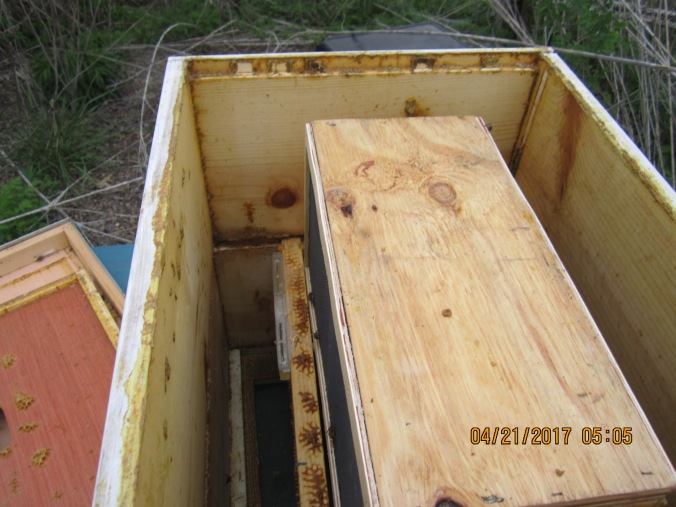 Bee packet upside down over frames.

This allows the bees, who now have food and water available, to crawl out on their on. Thee days later I opened the hive, took out the box and the vast majority of the bees were enjoying their new home.

The queen? I went back a couple days later to free the lady and to put one more set of beetle traps into each hive. When I checked on the queen containers in both cases the bees had already freed the queens. I found the tape lying on the screened hive bottoms when I moved the hive bodies to clean out and put in these traps. Apparently duct tape is not all its cracked up to be, or bees are smarter than we give them credit for.

A tip based on my lessons learned here. When you are only using a small number of frames in a hive box make CERTAIN they are close together. If not you end up with a situation like this:

The bees have built comb out attaching the two frames together. I lost some brood because of this and I am jealous of my baby bees.

So I checked them again yesterday and the bees are still great. As I said, one hive is behind some but is still doing well. I enjoy fooling with bees and taking care of them, but that isn’t all I have been doing.

New dog runs and new chicken coops have been happening. I will talk about them later.