Well, no we don’t , but those words did come from Ed’s mouth yesterday as we were leaving for a day trip to Independence.

As I walked out the back door, I looked out across our front pasture. None of the pastures were mowed last fall, and they are  overgrown. Something caught my attention, and I went back into the house for the camera. A plastic grocery bag, caught by the wind, was caught in a bare sapling. As Ed and Katherine turned to see what I was photographing, Ed laughed and said, “We surrender!”.  I had to admit, the bag did look like a white flag.

See the white spot in the middle of the picture?

We all had a giggle and got in the car.

Let me back up a minute. Night before last, late in the evening, we had a thunderstorm. Yes, that’s right. A thunderstorm in January, in northern Missouri. I didn’t see any lightning, but I did hear the thunder and the rain. It poured!  So, yesterday morning, everything was pretty soggy. On top of that, the weather must have remembered where it was, because it was windy and getting colder by the minute.

As we made our way along 116, Ed said that it looked like we might be going into some fog. We’ve had a lot of fog lately, so I really didn’t think that much about it until a few miles later. The air became cloudier and I had a moment when my mind had to make a small shift and remind me that fog does not blow across the road…no, snow does that.

Ed asked if I thought we should turn around. I didn’t, and we were out of it in a few miles.

The rest of the day went pretty much as planned, and we got home in the mid afternoon.

The dogs met Ed as he got out of the car. Then Meeko decided he should come across the driver’s seat to say hello to me. While Kat and I carried in groceries and other things, Ed went to plug the hole. It didn’t take long.  They have found a new place, but Ed will have to get more pallets before he can fix it permanently.

I think Ed is right about the free roaming dogs being the major catalyst behind the escapes, but I also think they might get a little bored. Let’s be honest, they have nothing but time when it comes to figuring out how to escape.

Kat and I have slowly eased back into school after the holidays, and this last week, in Biology, we looked at fungi.  We collected two different types from outside, as well as a mushroom from the fridge. She was able to get some spore samples and look at them under the microscope. Her overall takeaway is “Mushrooms are cool!” Next week, we move on to sea life. We’ll be starting some dissection soon. I’m not sure how well she will take to that.

Ed and I went to the monthly bee club meeting on Monday, and Ed was able to order new bees. They should be here in April.

Hope everyone enjoys their weekend!

It used to be mostly Meeko.

Hi, my name is Meeko, I am very good dog. Good at escaping, excellent at making an all around nuisance of myself and the world’s greatest licker of unsuspecting faces.

Meeko has been known to literally go through a welded wire fence. Push with the head, get a paw in there, heave and struggle, and BOBS YOUR UNCLE, you’re out. His favorite method, however, has always been up and over. If Sir Edmund Hillary had only had Meeko along, he would have made much shorter and easier work of Everest. Meeko was the ultimate climber. No fence was high enough to withstand his assault.On his way out, he was often able to press the fence down, so the more gentile Libby could step over and have a run with him. We will discuss the difference in capturing techniques for the two dogs shortly.

That continued from the time Meeko was with us (2010) until November 2015 when he, while trying to climb out, got his foot caught in the fence, dislocated his right hip, and spent six weeks inside wearing a lampshade The whole ordeal cost us about five hundred bucks, which we just recently paid off. The injury, which still gives him trouble, has slowed Meeko’s climbing to a near stop.

Hi, Meeko again, just after doing a header without taking the footsie with me. OUCH! But it’s cool, I think my hat is much nicer than Ed’s don’t you?

Yet my dogs keep escaping.

I was working and Connie wired this dog kennel into the outside of the fence as a temporary patch until I got a day off. The next day it looked like this.

These dogs have, plus or minus, half an acre of scrubby brush to play with. Birds, rabbits, and what not visit them. They have a house and all kinds of open ground to run in. These dogs are well fed and watered, yet they have worn a trail completely around the inside of the fence and, way too often, we find them out and running come evening or early morning.

Why do my dogs keep escaping?
Libby next took up the mantle of escape artist most excellent. Libby had shown a propensity for tunneling even way back when but, after Meeko’s accident, she developed into a tunneler that would make a Welsh coal miner blush from his inadequacies. I would hazard a guess that if you combined her tunnels end to end, you would have dug a decent WWI defensive trench. 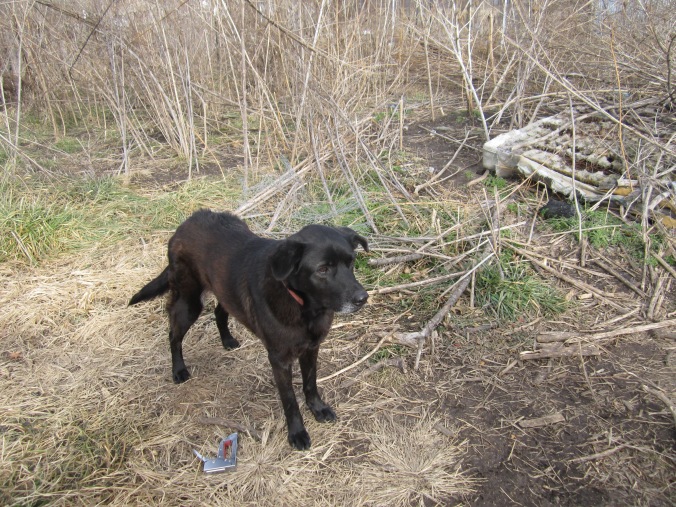 Hi, I am Libby, I do not stand for pictures well because I sense you want me to. I am an older lady but still have a lot of spunk. Also, if I keep digging any deeper, I am going to have to learn to ignore people calling me in Chinese.

She also, even though she is getting on, has no dental problems. She will get any fencing, or troubling chicken wire we put down, in her teeth and bend it out of her way. I cringe when I think about it. So, since Meeko’s over is blocked, Libby bet on the under, and has been beating the house fairly consistently.

Please note the bent up welded wire fence. Libby did that with her teeth. You just touched your mouth didn’t you? Yeah, that looks like it would smart. I covered the whole mess with chicken wire, hooked in with pig clips and weighed down with pallets. So far so good but she still tries.

I have a word for you: Pallets. She, so far, has been stymied by pallets laid along the bottom of, and attached to, the fence. Note: I said so far, but I might want to go check before I go much further. She IS a resourceful old lady.
Still…. why? Libby was a town dog and had no run to speak of, and Meeko cares about nothing much more that Libby or us. As long as we all appear happy, he is delirious. When he does escape, he is so proud of himself he comes directly to show us how smart he is.

Let me take a moment and compare and contrast how, after an escape, you recapture each dog.

Meeko: Yell, “Hey Meeko, come here!” and he comes. I do not believe it really matters who yells. He might just come to anybody. I am certain that it really doesn’t matter what you yell. “Meeko” is just proforma. Yell whatever you want. He will come.

Libby: Forget about it. She will not come until she is ready and, when she does come, she is more likely to give you that lopsided Libby grin and bolt right or left at the last minute. You see, when she was young she got the message that playing chase was a fun game and, if you came when called, that was the end of the fun game.

Treats? Good luck with that. I have personally offered her everything from raw meat up to (but not including) a child. She will ignore you. There is always time for treats when the game is done. Live rabbit, squalling cat, or two pounds of ground round, are not worth the end of the game.

So the best way to catch her is to let her run herself out or, better yet, don’t lose her to begin with.
But WHY do my dogs keep escaping?????

For Christmas I got an infrared, motion activated, game camera . On the very first night we put it out, we got a hint of the answer to that question.

Find below some pictures of our dog’s visitors:

Hi, I am the big, unleashed Rot that is not supposed to be here, I guess I am busted.

This is the other one. I have only seen him/her once in daylight and at a goodly distance.

I have business elsewhere as you can see but, based on the fuzzy tail, Ed wonders if I might not be a Fox On the Run. (For Tom T Hall fans everywhere)

The Rottweiler is a dog that should not be on our land period. I am very certain he killed another dog last summer, even if by accident. He runs with a big yellow lab whose picture I did not get, but we did see both of them here, the other day during, daylight.

I took the opportunity of their daylight visit to do some target practice, with our 12 gauge, firing at a Juniper tree that was just to the Rot’s left. The remarkable thing is the beast not only seems to recognize a weapon. He seems to know something of calibers, gauges and sizes. He just moved away when I brought out my pellet gun, but I stepped out the door with the shotgun he suddenly remember a pressing engagement elsewhere!

There is another trespasser that we don’t see often. A black and white mixed mostly Border Collie I believe and we have a blurry vision of what probably is a fox.

Thinking back, we had the same thing happen at our old house. Meeko had quit attempting to get out until folks moved in with two little dogs which were allowed to run loose.

So, having finally got enough breathing space, I got a chance to write a blog post.