Well, no we don’t , but those words did come from Ed’s mouth yesterday as we were leaving for a day trip to Independence.

As I walked out the back door, I looked out across our front pasture. None of the pastures were mowed last fall, and they are  overgrown. Something caught my attention, and I went back into the house for the camera. A plastic grocery bag, caught by the wind, was caught in a bare sapling. As Ed and Katherine turned to see what I was photographing, Ed laughed and said, “We surrender!”.  I had to admit, the bag did look like a white flag.

See the white spot in the middle of the picture? 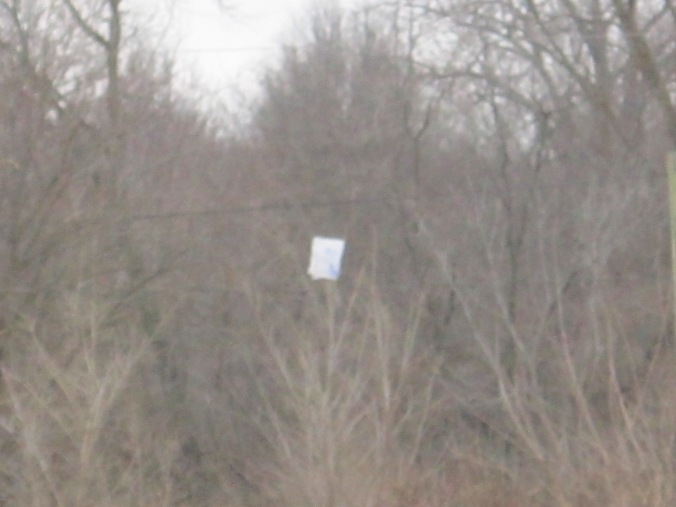 We all had a giggle and got in the car.

Let me back up a minute. Night before last, late in the evening, we had a thunderstorm. Yes, that’s right. A thunderstorm in January, in northern Missouri. I didn’t see any lightning, but I did hear the thunder and the rain. It poured!  So, yesterday morning, everything was pretty soggy. On top of that, the weather must have remembered where it was, because it was windy and getting colder by the minute.

As we made our way along 116, Ed said that it looked like we might be going into some fog. We’ve had a lot of fog lately, so I really didn’t think that much about it until a few miles later. The air became cloudier and I had a moment when my mind had to make a small shift and remind me that fog does not blow across the road…no, snow does that.

Ed asked if I thought we should turn around. I didn’t, and we were out of it in a few miles.

The rest of the day went pretty much as planned, and we got home in the mid afternoon.

The dogs met Ed as he got out of the car. Then Meeko decided he should come across the driver’s seat to say hello to me. While Kat and I carried in groceries and other things, Ed went to plug the hole. It didn’t take long.  They have found a new place, but Ed will have to get more pallets before he can fix it permanently.

I think Ed is right about the free roaming dogs being the major catalyst behind the escapes, but I also think they might get a little bored. Let’s be honest, they have nothing but time when it comes to figuring out how to escape.

Kat and I have slowly eased back into school after the holidays, and this last week, in Biology, we looked at fungi.  We collected two different types from outside, as well as a mushroom from the fridge. She was able to get some spore samples and look at them under the microscope. Her overall takeaway is “Mushrooms are cool!” Next week, we move on to sea life. We’ll be starting some dissection soon. I’m not sure how well she will take to that. 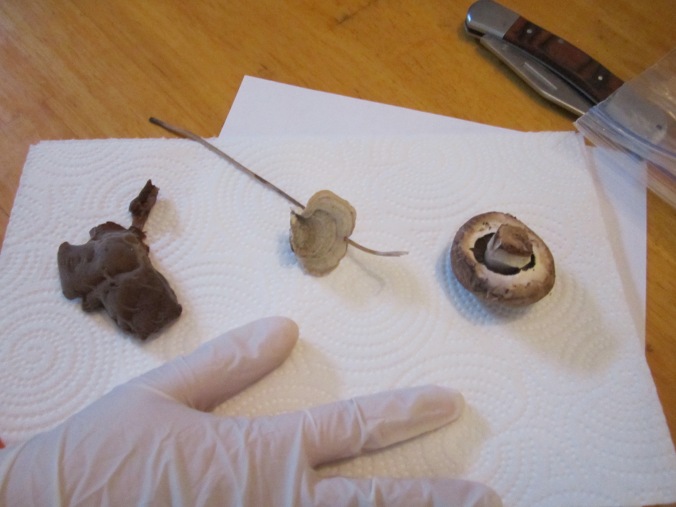 Ed and I went to the monthly bee club meeting on Monday, and Ed was able to order new bees. They should be here in April.

Hope everyone enjoys their weekend!