Its been hectic here on the homestead.

Ed went back to work this week, so everyone is having to adjust. Right now, he’s in training, so he’s doing the 8-4, Monday-Friday thing, but after training he will work 11 a.m to 7 p.m.. We don’t know what his days off will be yet, but we do know that it won’t be the weekend. All that means that, at least for now, he will be missing both Sunday morning church service and Wednesday night Bible study. He is not happy about that, but he is happy to be working again. We both know that the Lord will straighten out the scheduling eventually. He’s done it before.

Bam Bam put a deposit down on an apartment that is much closer to work for him. He drives about three hours a day now. So, he will be leaving the homestead when the apartment is ready at the end of March.

In the meanwhile, Kat and I have been knee deep in school, trying to finish up some things before March, when we will start a botany unit. We are both excited about that! I’m getting most of my ideas from a guesthollow.com unit study, and it starts with a study of chocolate (see why Kat’s excited?)

Today, as part of a study on caves, Kat was suppose to “carve” an ax head from soap. I thought that might be a little young for her, but I gave her the option, and she wanted to do it. She kept talking about all the soap shavings, and I remembered I had a jar of soap slivers that I had been saving. After a few minutes of internet research, I found something I thought we could do.

Everything I read suggested grating or chopping the soap, and neither one of us was really up for that. So we just put what we had in a pot with about a quart of warm water. We let it cook on low for about an hour. Now it has to sit covered at least eight hours or over night. I’ll let you know how it turns out.

With Kyle gone and Ed at work, Kat and I are going to have to pick up the slack with some of the chores. Nothing major, just little things that add up, like taking the kitchen compost can out to the compost bin near the barn, taking the trash to the road, etc. Things that Ed has normally done simply as a matter of course. Once we get critters, we’ll all have more chores anyway, so we might as well get used to it now.

After that extended January thaw, we went back into the deep freeze. We brought the dogs in nearly every night last week. I think our coldest morning was -7 (F), and that does not count the wind. We did have one day in the 50’s, but today it is gray, cold, and windy.

Kat took this amazing sunset picture Sunday evening on her way out to youth group. 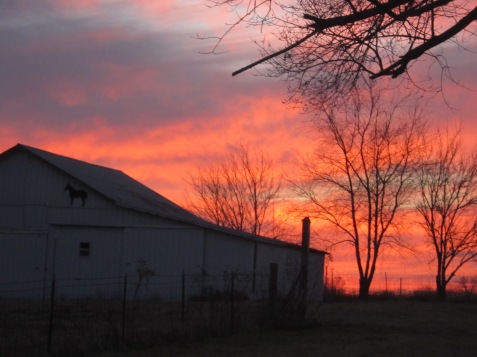 Speaking of evening, we have had a fox visitor several evenings, as well as early mornings, which is driving the dogs crazy. Meeko has decided that the shock he gets from the underground fence isn’t so bad if he hits it at a dead run. Yes, I know. He is crazy. We plan to build a real fence with a slick wire as soon as we have the funds, but for now, he is on a cable. I don’t know who hates it more: him or us. The only one who doesn’t seem to mind is Libby. I think that is because she can now get attention from us without having to fight off the attention hog (Meeko).

I managed to make some yogurt this week with a half gallon of whole milk and two tablespoons of Greek yogurt as a starter. By the time I thought about taking pictures, it was gone (Bam Bam). I’ll be sure to take some next time, and explain how I did it. I think that will eventually be a weekly event. I really like yogurt.

I’ve started preparing an area in front of my east-facing picture window for starting seeds. Ed attached a florescent light to a frame that he originally made as part of a jewelry display (that’s another blog post), for a makeshift grow light. I bought a few herb plants at Sprouts last week and they seem to be doing quite well under it. Kat and I also started a terrarium and placed it there too. She’s had the kit for a long time, and we just never did anything with it. Don’t know if the seeds will grow or not, but we’ll see. 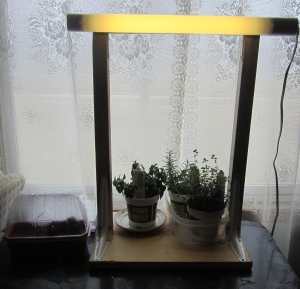 I plan on bringing in my mini greenhouse, as well as a baker’s rack that I’ve used as a plant stand. I just haven’t done it yet. When money permits, I’m going to invest in some house plants too. I used to have Wandering Jews and African Violets, and would like to again.