I have a fairly low tolerance for self-pity, especially when it is my own self-pity. So, other than feeling sorry for myself about the loss of the bees what have I been up to this winter? For one thing I have been teaching myself to fix my musical instruments with a long term plan.

At some point I intend to fully rebuild this old Kay that I have stuck back in a closet. The model number indicates it was built sometime in the late fifties to early sixties. It is a solid guitar but it seems to have suffered some mistreatment. So expect to see some posts on this one down the road a bit. 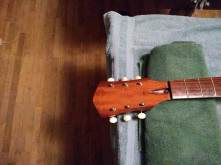 What started me on wanting to fix guitars? Money and time mostly. A while back, with much groaning and gnashing of teeth, I replaced the saddle on my thirty-six year old Applause guitar.

What I ended up doing was watch two videos on You Tube; about half an hour, no charge. Then I bought two quarter inch dowels I need to do the repair. Repair time was about an hour and cost was under two bucks, and I got an extra dowel. (Old Army thing, if you have to have one take two with you.) The boost to self-confidence and renewed interest in DIY stuff? Priceless.

So lets look at what is involved:

Step one: Get the instrument seated on a firm surface that will allow you to work in good light and not scratch or dent the instrument. My Hummingbird is a little over two years old and has only got one memory mark on it. I try.

What you see is nothing but a side work table to my desk with two towels. It works just great.

Guitar and more tools than I am going to need.

Step two: Firmly insert your dowel into the pick up jack. The first time I tried to fix this I supposed that I could reach in when I changed strings and just tighten her right up. Yes siree Bob, just tighten that rascal right up. Note to self, the human arm don’t bend that-a-way. So you seat that dowel in the pickup hole firmly.

Make certain the dowel is firmly in place. You do not want to be fishing for this thing.

Step three: Take loose the cover that also is your strap pin. Move it back on the dowel.

Another note: I do not remove any of the hardware from the dowel. I leave it there until it is time to put the thing back together because I am not fond of the where is the INSERT NAME OF LOST TINY THING YOU CANNOT DO WITHOUT HERE game.

Step four: Push the dowel up into the guitar until you are under the sound hole. You will be able to see and reach the hole amplifier jack assembly. You do not have to remove the strings.

Step five: You will see another small nut on the jack and two more washers. How much you need to tighten the nut depends on how loose the jack and pin assembly were. I wish I could be more specific but it will be a matter of trial and error. When you think you have it right, carefully pull the dowel with your amplifier jack assembly on it out of the hole at the end of the guitar. Once again, you do not want to loose that jack inside the guitar or you will have to go fetch it.

So there it is, the strap pin is tightened and seated. The jack is flush with the outside of the strap pin. On top is all the tools I got out of which I used the needle nose pliers, the 3/8 wrench and one dowel.

What we are trying to do is tighten that nut until the whole assembly firmly seats into the hole prepared for it with the portion that the strap pen screws on sticking out and the rest even. You have finished you hope.

Is the whole assembly tight when wiggled? When you look at the assembly is the tip of the pick up jack even with the strap pen that closes and covers the assembly? It should not be recessed or protruding.

Of course if you have access to an amplifier,  you will pull out your chord and test it even if you do not normally play over amp. Because why? Because Mommy potty trained you with a ball bat just like me.

One thought on “Things To DO When It’s Too Cold To Do Things: Fixin’ My Guitar”