For those of you who do not know we have two dogs. At least that is what we refer to them as. “Look dear, the dogs have totally wrecked two days of work and are about to cost you another hundred and fifty bucks in materials. Aren’t they sweet?” 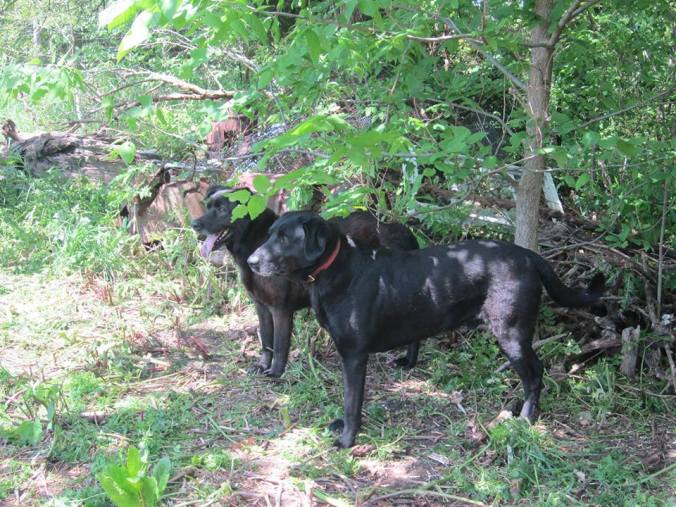 This is Libby and Meeko, Meeko is the one closest to you and Libby is the pretty girl on his right.
They look so innocent don’t they?

The eldest of the two is known as Libby or Libby Lou by Connie. We won’t go into all the things I have called her; this is a family blog. I really have no room to complain about Libby; in point of fact, Connie had her before me so Libby has some claim to Squatter’s Rights.

Libby, the best we can tell, is part Lab and part Akita. This means she is a curious, intelligent animal who loves to play, understands exactly what you want her to do, and will sometimes even do it, if she chooses.

That is the genetics of the situation. Then there are the environmental issues. Connie got Libby when the dog was about four months old, and she had already been conditioned to something interesting behaviors and interpretation of human words and behaviors.

For instance, as Libby still understands it, “Come here Libby.” Means “let’s play a fun game of Tag and Go Hide” a hybrid of Tag and Hide and Go Seek where we, being it, approach Libby and just when we get close enough to “tag” her she runs away, hides somewhere and the game starts over.

This game has the potential to go on for hours and end only when Libby has had all the fun she can have. Luckily for us Libby is beginning to age somewhat and sessions are fewer and further between.

Another fun Libby game which got her banned from sleeping in the house except in really inclement weather is, “Lets Chew What Belongs to You”. This game, played by a normal chewing dog, involves finding a shoe, shirt, towel or whatever and destroying them completely. Libby’s version involves finding everything you own which is within reach, chewing a half to a dollar sized, almost perfectly round hole in it and moving on to the next item in line.

Libby is nothing if not creative.

The last of Libby’s little games she learned as a pup was probably re-enforced for her by Connie’s youngest son who used to play with her quite a lot. It is a form of dog/person rough housing in which Libby rises up on her hind feet and almost boxes with you. Of course she does not stand completely up. She only goes up high enough that, when she strikes out she will hit a man who is sixty-seven inches tall right in the groin.

Go ahead, ask me how I know?

Yes, she has her eccentric behaviors, does our friend Libby. What she intends to do with the buzzards she is constantly barking at were she ever able to catch one I have no idea. But when she sits and cocks that beautiful head looking up at you with those eyes it is a different story. When she goes berserk because the child is on the roof, or near the fire, in a frenzy of protectiveness, or when she rests up against your leg waiting for a pat and a smile you kind of forget all that.

After all, I have a few eccentricities of my own.