“I don’t really need the money, but the people I owe it to need it a lot.” That was something Hank Williams used to proclaim in the late 1940’s, on his Health and Happiness radio show, when he was selling his own records over the air. If you would like to hear some of that, you might look here.

Hank had a way of speaking for the common man. I really care nothing for money. A horse can’t eat it. Too bad my creditors do not agree with me. So I have to work, because robbing banks in Missouri has already been done to death.

Now I am settled into my new job, I can take a few moments and write to you about what is going on around the old Homestead. I have not been idle on that front, it is just that, between working, working around the place, eating, and sleeping, I have had very little time for much else.

So here are some random topics, things I have worked on, mistakes, and successes we have had over the last few weeks. As I told Connie not too long ago, “We do not fail; we either succeed, or learn how to succeed next time.” Unfortunately, quite often the tuition at the University of Hard Knocks can be high. 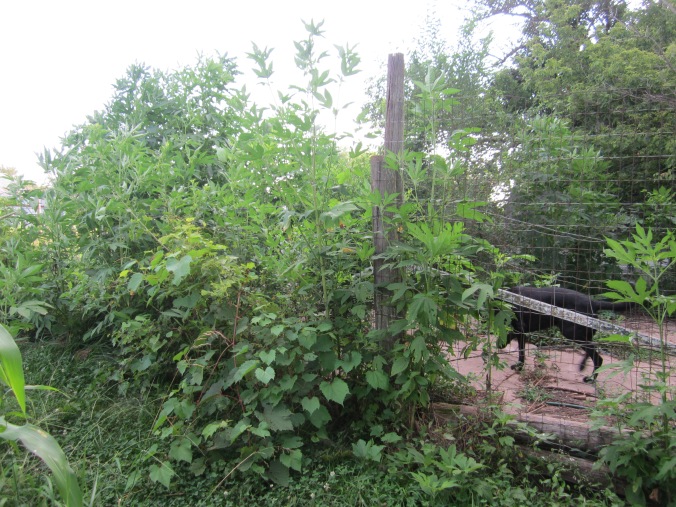 The Rag Weed that ate my fence row.

This is my forth summer of attempting to do some small farming, and wrest some small piece of property back from the clutches of flora so diverse and aggressive, it staggers the imagination. This year I have learned about the effects of an over abundance of rain on plants in the state of Missouri:

It appears that over watering kills, stunts, and/or messes up the growth cycle on everything you want to grow. Causing such behavior as cauliflowers that go straight from “tomorrow I will grow out and make a nice head of cauliflower” to, “on second thought I will just go to seed, see ya.” Not to mention that grass likes rain water much more than tomatoes, who “don’t like to get their feet wet” or corn which tassels while less than waist high. 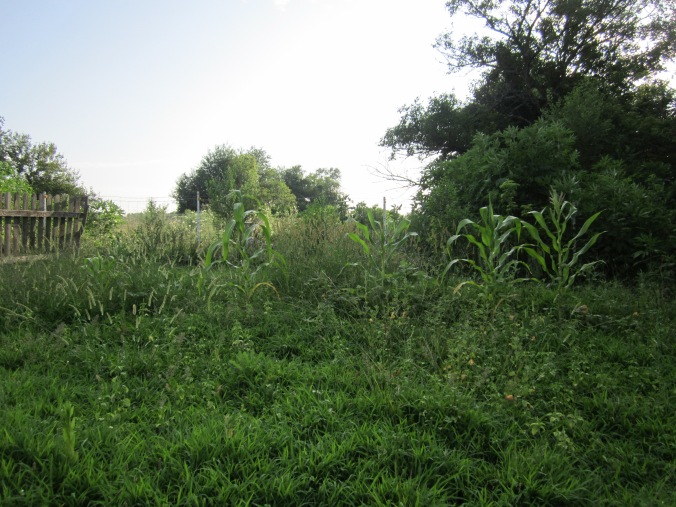 The grass that ate what we were going to eat.
You can stand there and watch it grow.

On the other hand, everything you really would rather NOT grow, when allowed to take every other day showers, grow like Jack’s Beanstalk. Connie has learned to name near every invasive plant, common weed, tree, shrub, or fern on the place; whether useful, neutral or dangerous. We used to walk across the pasture and she would point down at her feet, name the plant, and tell its lineage, whether it is good or ill, and what we should do with it. She still does that, but now she has to point up over her head.

As I stand in the dog lot, I recall having cut out all the standing hemlock with a machete and some other light hand tools. I was counting on my ability to find the stuff as it grew back and destroy it quickly. That worked for a couple of weeks. I would see the little plants and knock them down with a hoe or even my foot. As I stare up at the seven feet Rag Weeds I ignored, I think, “Use the chain saw.” 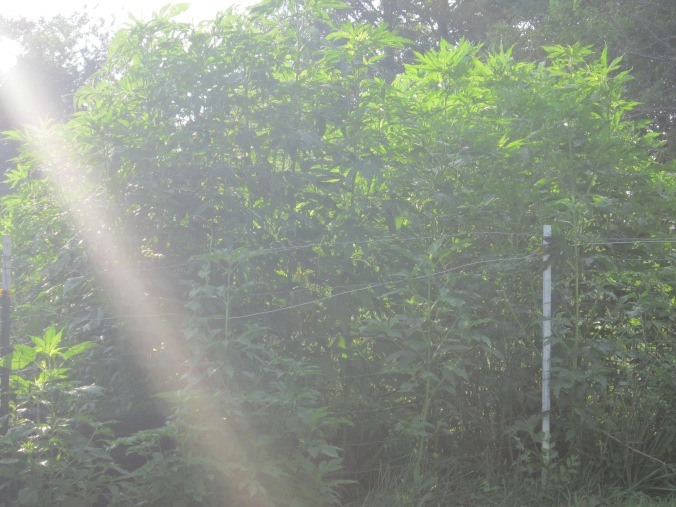 This is Rag Weed, the picture was taken by a 5 foot tall most beautiful woman in the world.
But it makes the perspective interesting. The plants are between 7 and 8 feet tall. 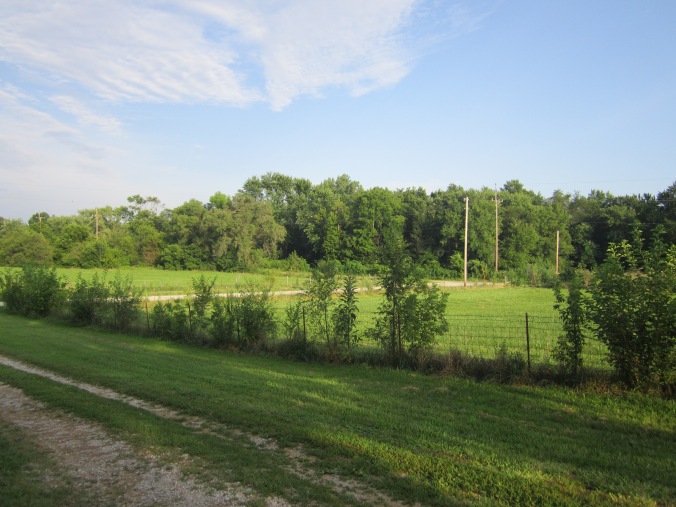 In spring none of these sapling were over knee high and bigger around than your finger.

Let’s talk about the fence rows. All winter long, I would look out my door and see the sprouts caught up in the fence rows and think to myself, “When it warms up a bit, I will cut those out.” Let me save you some trouble. Don’t ever do that! Barring weather so extremely bad that the risk of death or serious injury is imminent, cut them things out right now. My fence rows look like a scene from one of those dinosaur movies.

Put shortly The Homestead is suffering from serious case of Underbrush Overgrowth.

I have never been a real fan of lawns. They always seemed to me to be such a useless waste of time and resources, unless you had chickens running loose on them. Then there is mowing the things weekly, and the constant obsession with only having the right grass. Crab Grass need not apply, and God forbid is that a Dandelion? Who cares and why?

So why did we end up buying a place with a BOY? (Big ole yard). 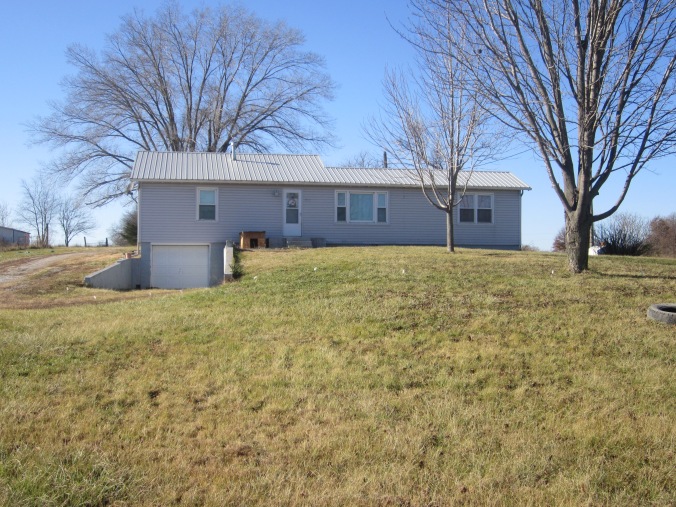 This is the front yard, it is not as big as some but try mowing it and the other half with a push mower.

Because the BOY surrounded the house we wanted and was surrounded by the land we wanted, on which sat a cool barn with two horses pained on the front. Who could resist that, and why should you? So I have a large yard in which grows plants of all shapes and sizes, a lot of which Connie assures me makes good salad.

After having mowed our largish yard four or five times last year and again this year about the same, I spoke to Connie saying words to the affect of, “Hon, as soon as we get a chance we need to buy a riding mower.” Something I had largely disdained. She tells me that I misinterpreted her look, but I would swear she looked at me as if to add “wimpy boy” to her smiling statement, “We’ll have to see dear.”

The next week, she offered herself and Katherine to be stand in mowers. switching off the lawn mowing every time around. After a few rounds we finished and, back in the house, Connie smiled at me and said. “Dear we need a riding lawn mower.” Ah, the joys of shared experience.

So now we have one; a riding lawn mower I mean. Next week, I will tell you how that is turning out. By then I should probably have the stitches out.