So where have I been? Frustrated, angry at myself, and feeling like a rank failure. Oh, did I mention feeling sorry for myself? Yeah. There is that. The last I spoke to you folks about my bees, I had three healthy hives that were going like gangbusters. I had harvested enough honey to pay for the purchase of one nuc I made last year, and everything was going well.

About ten days passed as I did other things, and then I revisited the hives. Two were just gone. I mean empty. I opened the hives and found signs of wax moths, and I thought that was the problem. However, I am wondering about that now and I will speak about it later.

First, I checked the third hive, which was a good three to four hundred meters from those two. It appeared to be fine, showing no signs of problems at that point. I even pulled the lid while not wearing my bee gear to look. They seemed happy and healthy. more about that later.

When I opened the two empty hives I had my second surprise. There were not very many dead bees on the bottom board. No more than a dozen which is about what I might find if I had disassembled a healthy hive. So where did they go? I think “go” might be the operative word here. These bees were not killed; they seem to have just left.

Why I think they just left. Ten days ago at most these were FULL of honey. 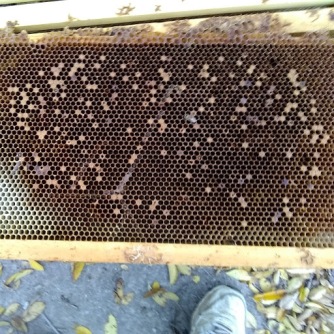 This is a brood comb. What this indicates is beyond my pay grade. 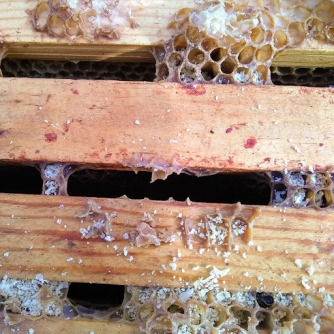 This I have seen before. The work of wax moths. But did they comb befoer the bees left?

This was in late September. I kept a close eye on my final hive, and changed the top board for winter. Then the worst winter I have seen since we moved to Braymer hit us. Early in October we had a freeze that set down on us for over a week. When I checked on the final hive, the bees were dead. Not gone like the first two: dead. There was good honey and no real sign of hive beetles or wax moths. Just dead.

It was the freeze, I was not the only bee keeper in the area to lose hives to this freeze. It just happened it was my last hive. And, for me at that time, the last straw. I was heart sick, guilty, angry at myself, nature in general and, yes to some extent, God. Aside here; it is OK to get angry at God. If you read th psalms David was angry at God more than once. Just as long as you do as David did and try to end your rant with “Thy Will Be Done”. Even if you have to say it through clinched teeth. Oh, did I mention feeling sorry for myself? Yeah, that too.

The other hive with Wax Moths I immediately disassembled and put all the parts in a freezer for over a week. This one was waiting for freezer space and I made certain nothing was getting out until I took care of it.

Things I said to my loving wife, Connie, at the time included but were not limited to, “I liked living with a farmer but never particularly liked farming.” “There is a difference between wanting to raise bees and being able to.” Cut off about five yards of that kind of material and you got the idea. Frankly, somebody probably should have given me some fruit and cheese to go with that whine.

So that is where I entered the winter. I froze all my equipment for a week, some with nature’s help. Then I went inside and tried to figure out what I was going to do about the bees. I cannot afford to buy more bees at this time. That is still where I am at today. Am I going to try to get back in the bee keeping business? If so how? I have a lead on the possibility of some wild bees and there appears to be two hives who absconded right here on the place I might could trap.

So what is God trying to tell me about the bees? Is the message, “Ed, bee keeping is not your thing.” Or is it, “Suck it up buttercup and drive on because you have not failed until you quit.”

Seriously, right now I still do not know the answer, but spring is finally beginning to break. There will be another day unless all the snowfall and the present rain doesn’t drown us all.

So I will go outside, clean up some equipment, save what I can and decide. Do I sell it, or try again? We will talk in a week or so.