The reason for having a garden is not only to have fresh fruit and vegetables in the summer, but also to preserve them for the winter months. That can be done by canning, drying or freezing. This year, we didn’t have much of a garden so we didn’t have anything to put up, except for a few herbs that I am drying.  That is about the limit of my drying experience: herbs. My preferred method of preserving is canning although I’m still a novice and have a lot of learning to do. I save freezing for shorter term preservation.

As you know, we planted fruit trees last spring, and while they are all doing well, it will be at least three or four years before they produce any fruit. However, I am getting some preserving the harvest practice in this year because I was given several pounds of pears and granny smith apples. 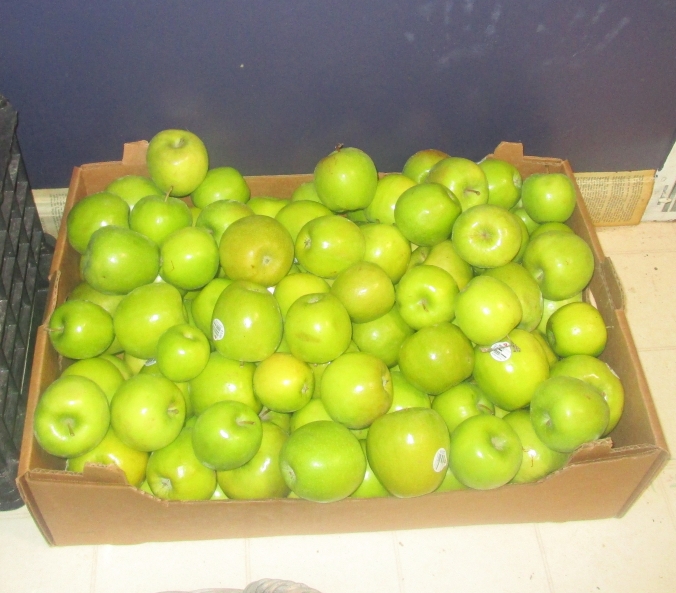 Pears are funny things. They do not ripen on the tree. They fall off and then ripen. You have to catch them quick because the window between green and rotten is very small. So what did I do with thirty pounds of pears in varying stages of ripeness? I made an enormous batch of pear butter. Let me just say in advance, that it wasn’t a good idea.

I used the pear butter recipe in the Ball Canning book. It called for pounds of pears per recipe and gives the approximate yields in pints (this is also where I rediscovered that my water bath canner is only large enough for pint jars) One recipe makes about four pints. First it says to peel and core the fruit. So Chicken Girl and I did that. We had to take a couple breaks to wash our hands and the knives because, if you didn’t know, peeling pears is a sticky mess.

Anyway, we filled my largest stock pot with pears. Then I was supposed to add some water and cook it until the pears were soft…um some of the pears were already soft…Then I needed to use a food mill or a food processor to make pulp, being careful not to liquefy it. A food mill is on my wish list, (and would have been a much better choice) but you use what you have right?

Then I was supposed to measure out two quarts of pulp per batch. I had six quarts so that is three batches…but I started with thirty pounds of pears which was five batches? Fine, three batches it is.

So I added the sugar and spices and put it all back in the stock pot. I was supposed to cook it down until thick, stirring occasionally to keep from sticking. What it did not say (anywhere in the book..I looked) was that this cooking has to be done on LOW and takes a long time (like hours). I had my fire too high and even stirring constantly, I could feel it sticking. What do do. I turned it off and went to look online for more information…Yeah low and hours…oh look there…crock pot! Yes! I have crock pots

So I pulled out both my crock pots and filled them. The bottom of my stock pot had thick black gunk stuck to the bottom that we are still trying to get out. My take from that is that I tried to cook too much at once over too hot a fire, in a pot with too thin a bottom.

Anyway, I left it all in the crock pot overnight. And canned it the next day. I ended up with twelve pints. I’m not impressed with it. Bam Bam said he thought it was ok, but then Bam Bam really likes pears.

As for the apples, learning from the pear butter experience, I went a little different route. First I made an apple pie (I don’t do home made pie crusts very well, but I wanted to give Chicken Girl the experience..she doesn’t do them well either). The pie tasted good, but it wasn’t very pretty. Then I came across a recipe for fresh apple cake. That was so good it was gone in about a day. Unfortunately, I didn’t get pictures of either.

Of course, I had to try apple sauce and apple butter, but only one batch at a time. If I could do that, then I would do more. I found recipes for both that used the crock pot. I’ll try the old fashioned way again, when I have better cooking pots.

I did apple butter first. I found the recipe here. So we peeled and cored the apples. I’ve had this little device for years, and I can’t tell you how much I love it. It pretty much does everything for you. Even if you need to chop them up more finely, it’s easy to do with them already peeled, cored and sliced.

Making the apple butter was an all day thing, because it needed to be in the crock pot for a total of ten hours. The first hour on high, the last hour with an open lid, and the eight hours between closed and on low. You can imagine how good it smelled. Anyway, it was supposed to make three pints. Well, it didn’t quite. It was more like two and and three quarters, so I canned two pints and left the third one open in the fridge. Ed and I had some with left over biscuits this morning for breakfast. Yeah, this is a keeper recipe. 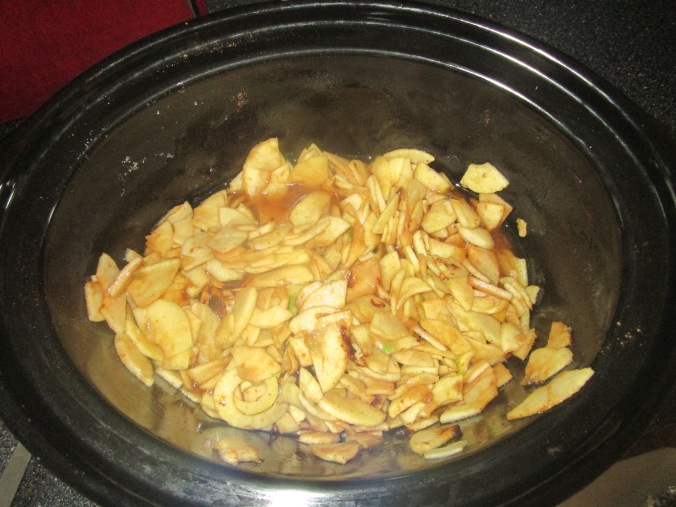 after the first hour

Next came the apple sauce. Again, I found an online recipe. So, this morning, Chicken Girl ran five pounds of apples through the peeler. It took a little longer because the apples are beginning to spoil, so we had to go through a few bad ones. Sometimes, you can’t tell they’re bad until you cut into them, or until the corer gets stuck and you realize the core is no longer solid. Yuck. Anyway, back in the crock pot. This time on high for three hours. Again, the house filled with the smell of apples and cinnamon.

At the end of three hours, I opened the crock pot and took a look. Then I used a potato masher to mash the cooked apples and poured it into a glass bowl. Isn’t it pretty?

See how much darker the pear butter is?

Oh, and as for Chicken Girl? She won’t taste any of it. She only likes fresh apples. Once they’re cooked, she won’t touch them.

My thought for now is to see how many of the remaining apples I can save and turn them all into apple sauce.

What is your experience with preserving the harvest?