She was a little tiny woman who was my Great Aunt Hazel’s daughter. Her husband was an old school mountain man who worked his own backhoe for money when he wasn’t too busy hunting and fishing.

They were Toot and Peanut. Heaven help me, I do not know their real names and I bet most of my motley crew of cousins don’t either. But we do know why they called him Toot. Because Toot made whistles.

Oh they were great, and half the fun was watching him. He would casually cut off a green twig, shape it down, push the pith out of it with whatever came to hand, cut a hole in the top and hand you a whistle. Total elapsed time from twig to whistle; just minutes, and the rest of the afternoon’s worth of entertainment.

At every family gathering Toot was easily found by following the trail of wood shavings and kids who were fast ruining their good clothes and blowing whistles.

In this day of Cell Phones, Xboxes, computers, tablets (Not paper, some other form of computer. Don’t ask me to tell you much about them), and heaven only knows what else it, seems odd to talk about homemade toys, but I will make a bet with you.

Have a picnic and get somebody like Toot out there making whistles and watch the young ones gather ’round. There is just something magical about someone who can turn a stick into a toy.

Of course, in Appalachia where I was raised, a stick was already a toy. A bat, a gun, a sword, Little John’s cudgel, a magic wand and the list is only limited by our imagination.

Some of the things my buddies and I made for entertainment and sport were:

A bow and arrow. Again, sticks, preferably hickory if you wanted to make something really lethal that would last but any green stick would do for a toy.

Then you need a string, check Mr. Rabb’s bailing machine and now we have string. Carve your notches in both ends using your Barlow and then stretch it to bend the bow. If it breaks you got the wrong kinda stick start over.

Now we need arrows which is to say smaller green sticks. The very creative would find and attach heads to their arrows, some used rocks but a pair of tin snips and an old tin can would yield six or eight nice ones. It’s amazing we lived and a heavenly miracle we all have both eyes.

Rainy days in the mountains can stretch for a week or so. Now you got two boys stuck inside with you and, here it comes, “We ain’t got nothin’ to do!” Grandma found an old larger piece of cardboard and her yard stick. In a few minutes she had a checker board and the button jar supplied the checkers. That kept us busy until the rain stopped.

Another favorite was the Button on a String toy which some called Dancing Buttons. 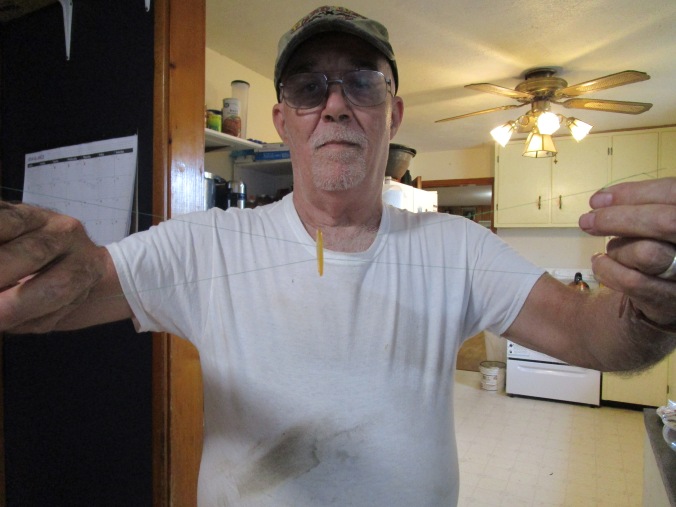 Home made sleds were a big hit. Most of ours were made with left over scrap lumber taken off of finished jobs by my Great Uncle Andy who was a house painter. They were heavy, bulky and subject to dump you out and roll over you but we had a great time.

For a child with an imagination almost anything becomes a toy. Just watched a Tarzan movie? Great! The mountains are covered with grape vines as big around as your arm. Lets go play Tarzan. That one cost me a half dozen fractures from one fall. Two and a half months later, I was at it again.

I am going to turn this to Connie now who has some information about toys her Grandmother used to make and maybe she can talk about homemade dolls and such. I don’t know nothin’ ’bout no girl toys. At least nothin’ I am going to admit.

When I was a little girl in the late 1960’s/early 1970’s, I stayed with my great grandma a lot. She was in her seventies and lived in a tiny trailer on a fixed income. To me it was the most wonderful place on earth. She had an incredible imagination, and could make a game out of just about anything. I think she probably had a lot of practice growing up. We pretended a lot. She told me stories, recited poems, and sang songs. She taught me to play rummy and we pretended we were the Maverick brothers (from the TV show) playing poker. One thing I remember her doing was taking a Kleenex, folding it in half, rolling two opposite corners toward each other, and making what looked like a baby in a blanket. I cannot for the life of me remember how she did it. It seems there was Kleenex involved with clothes pin dolls too, but I don’t remember how. She may have wrapped the clothes pin with a Kleenex, and held it with a rubber band for a belt, but I’m not sure. We cut out paper dolls too. They weren’t the prettiest, but we had a good time, and we laughed a lot.

Here is my attempt at a yarn doll. She took about 20 minutes. I’m keeping her simple for now, but I feel like she needs a face and an apron. I found the basic instructions here 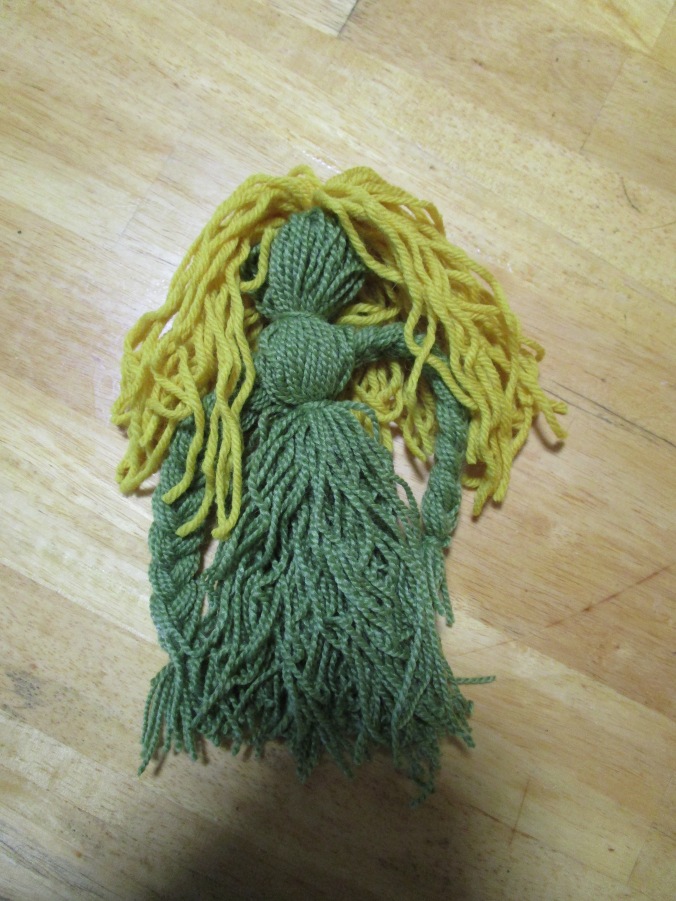 I made this little clothes pin doll in about 10 minutes. I just wrapped him in yarn and drew his face on with fine tip markers. The hair came from the scraps left over from the yarn doll. This has links to all kinds of clothes pin doll instructions.

Ed mentioned his grandma using buttons for checkers. When I was little, probably three or four years old, my mom would go visit a friend whose mother was bedridden. She would always tell her daughter to give me her can of buttons and some string. I would spend the whole time stringing those buttons. Then when it was time to go, I would just dump them back into the can. It kept me occupied the whole visit. Yes, I know. It’s doubtful that would keep a three year old occupied today, but it might.

As for making games, my step father used to draw out the game board for Battleship on a pieces of yellow legal pad paper. He would draw columns for the numbers and rows for the letters When we would play, we would just draw an x in the boxes made from the intersecting columns and rows in order to place our ships and record hits and misses.

Give a child an expensive toy and he will play with box. (At our house, when the child is finished playing with it, the cats take over.) The point is the most important toy a child can have is a good imagination. I fear that may be more endangered than anything else we have mentioned here.