The bees will be here on 21 April, so there will be another post concerning cleaning and setting up my hives shortly. However, another matter has taken precedent and I had to attend to it before I ended up pulling what little hair I still have out. (See the post Don’t Fence Me In).

One of the things I try to do in this blog, is save you the time, money, aggravation and extra work I put in to my ventures, before I succeed. As long as I fall on my face in the direction of the finish line, I do not consider it a failure; just another payment on the tuition at the University of Hard Knocks. 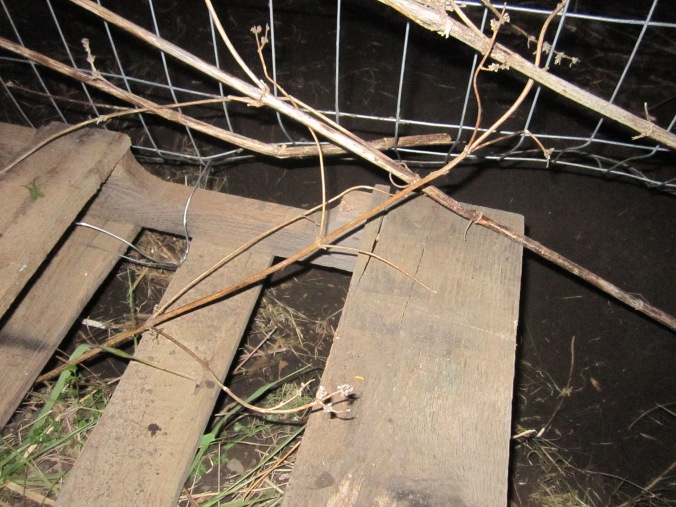 This is what playing catch up with a digging dog looks like.

Let’s talk about dog pens for a second. Two years, ago I built one. It seemed simple enough. Just fence in a piece of land, put the big ugly dog house in it, and insert the big ugly dogs. No problem right? Yeah…. sure you’re right.

The first question is, how much is enough land for a dog? I really cannot say. I have sicced Google on the problem, but have not found a satisfactory answer. First time out of the gate, I enclosed about 100 by 80 feet. Yes, that is 8000 square feet. Yes, I am a fool, thank you for noticing.

Shortly I realized that the north fence; the oldest line of fence I incorporated into my new lot, was totally inadequate. For a number of months, I tried to patch it with little success. I used electricity but that too, was inadequate.

Finally, I decided to back off approximately 60 feet, and put a whole new fence on the north side. Now we are down to about 4000 square feet. A little more reasonable. BUT, and there is always a but, Libby, the non-climber, took a special interest in that new 100 linear feet of fence. After the recent winter, the ground was particularly soft. Libby had a field day and once Meeko figured out what she was doing, the gimpy former climber became a pretty fair tunneler.

The first shots in the war for the North Fence

We were off to the races, but when you are patching as they go, you are always behind the power curve. My next attempt was to place pallets around the bottom of the fence; wired in, and nailed together where appropriate. Understand, I am still playing catch-up. While the tunneling duo have a preference for one linear 100 feet of fence along the north side, they have branched out, and it is impossible to predict where they will strike next.
What is wrong with my pallet answer? To start with, the dogs quickly out paced the local Co Op’s ability to supply me with pallets. Second, we are looking at 280 or so linear feet of fence. The average pallet is 44 inches long. That means I will need in the neighborhood of 70 more pallets. That would be a cost of $245.00. Shotgun shells are much cheaper.

The first attempt at the pallet answer, for what it cost to do this all the way around I could have bought a better dog.

Then Meeko got out, killed a chicken, and wounded another. Enough. But what to do? I was really considering Turkey Shot. In desperation, we tied the dogs out by the barn and let them sleep in a concrete floored feed room. It was a really bad answer, but only lasted about two weeks. 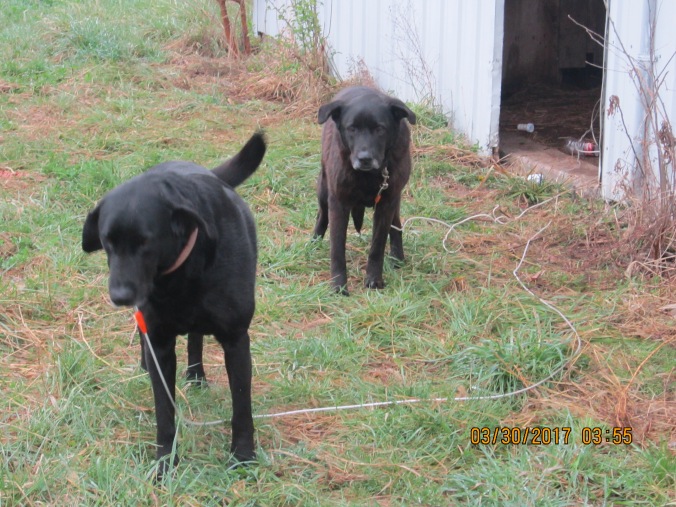 Tied out dogs them and I both hate it.

Then my lovely wife intervened. She took me out to the dog lot one day, and pointed out one obvious change. Change made: the dog lot is now 40 X 50 feet for two dogs. That would be 2000 square feet. Three or four people have been living in less square footage in our house.

What did this do for my fencing project? First, it reduced the linear footage of the fence by another hundred feet; now it was 180 linear feet. A hard and fast rule is that every foot you can reduce that fence, is one foot they cannot dig out of. Second, it gave me a vast amount of fencing and posts to work with when I reset the fence.

The infamous north fence. Note the fencing on the ground. Yes, it does appear to be working. No I do not need to lose weight, that is where I carry my lunch. Several of them.

Kat helping me line up a pole.

Me driving a pole with a 6 lb pole hammer. Possibly the greatest invention since fire.

Next, I ran fence wire on the ground ,along the line of the fence, sank steel post every five or so (got a bunch of those too),and strung the fence with the able assistance of Kat, the Chicken Girl. Once I had the fence up, Kat wired the fence on the ground and the standing fence together. I added two short poles on the outside which Kat also wired in. These were to make it difficult for the dogs to push out on the fence. Anyway, as I have mentioned, I have a bunch of poles, short and long.

The inside of the gate. Note the wire, even Libby cannot dig through that.

Then I pulled out the much abused and busted northern line completely. I laid wire down in the same way I had on the eastern side, added some poles, and put a sixteen foot cattle panel at the north-west corner which Libby seemed to take particular joy in attacking. Let her try to chew through that. After that, we fenced the rest. Everyone was helping there, and the dogs, chained in front of the barn, were watching; wishing we would hurry up and finish.

The western and the southern lines were the most stable. Along the western line, I placed all the pallets I still had. On the southern line, I stretched wire on the inside and the ladies wired it in while I was putting together the gate, and mumbling under my breath. It was getting late, but I wanted them in the new yard.

We hung the gate, and brought over the dogs, who were overjoyed about being able to run in their new home. Libby, of course, was checking the fence line carefully.

What can I tell you that you that will save you trouble?

1. Make a reasonable dog run. One lady, who had multiple dogs, said her 60′ X 40′ foot backyard was fine for three very large dogs.

2. If they are dogs, they can dig. Sometimes they dig just for fun. So find some way to build a no dig zone around the inside of your fence at least two feet wide. Wire fence works well; chicken wire not so well. Also, and this is my next project with the dogs, build them some stuff to play on and with.

3. Give your dog plenty of credit for creativity. When you think you have it sealed, think again.

All during the re-fencing project, there was a place where the fence had been bent and broken about 10 inches wide along the bottom. A number of times I said to Connie, “We need to patch that and slap a pole in there. In the hurry to get the Dweeble Twins off the chain (I hate chaining a dog), we neglected this less than a linear foot of fence. I went out the next morning, and they were gone out of that one little hole.

It is sealed now, and my ego is healing.