Yes, I admit it; I spend entirely too much time exploring the net. Pinterest is one of my biggest downfalls, but email notifications from blogs I read can keep me going for days. I’ll see something, which will make me think of something else that I really need to look up, and suddenly the whole afternoon is gone.

A few weeks ago, during one of my exploration excursions into the world wide web, I saw pictures of chicory blossoms. A few days later, when I saw those pretty blue flowers on tall, spindly stalks, I was really hoping I had chicory growing outside my barn doors. I went online and looked at more pictures of chicory plants and blooms! Yes, it’s chicory! Chicory root can be dried and used for coffee! Yes!

One thing I have discovered about identifying plants; once you know what something is, you see it everywhere. We have a lot of chicory. I noticed some growing outside my back door. It had been cut off several times with the weed eater and lawnmower so it wasn’t in the best place for a long healthy life. I thought that would be a perfect place to dig up the roots.

Well, not quite. This first snag was the stones underneath a very thin layer of top soil. The roots grew down through the stones. Ok, well, I’ll just dig them up. I wasn’t expecting the larger layer of gravel underneath the stones. At that point, I knew that my little garden trowel was not going to help me. I did manage to break a few roots loose, but called it a day.

A week or so later, when Ed was off and it was too wet to mow, I asked him to help me get the chicory root by the barn. Ed really likes chicory so he was agreeable to the task. Well, guess what? Underneath a thin layer of top soil, he found gravel: dry, hard as a rock, gravel. He went to find the mattock. If you don’t know, a mattock is kind of like a pick ax. 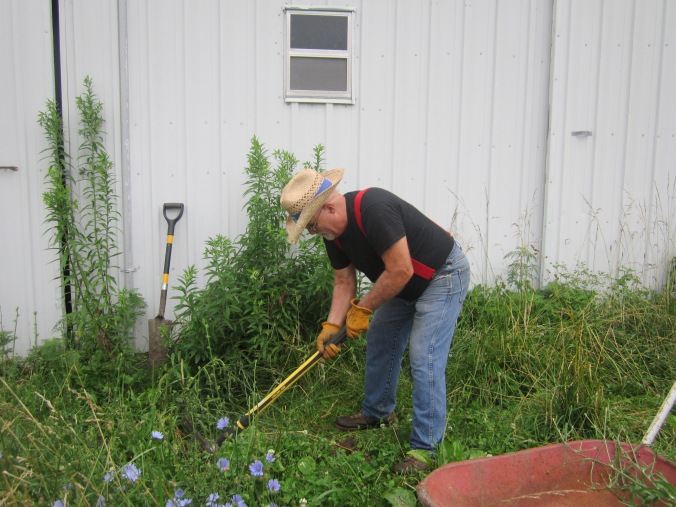 Ed and the mattock

After breaking up the dirt and gravel, He alternated a couple of different sized shovels to dig up the gravel and expose the roots. It took him over an hour to get this.

Since I really hate to waste anything, I spent some time looking up alternate uses for the stalks and flowers, but didn’t find much. However, I did find out some things I didn’t know about dried chicory root.

For instance: while it’s true that chicory is often used as an additive to coffee, it actually has sedative properties. So I suppose if you drank enough of it by itself, it would put you to sleep. It also works to relieve constipation. When I told Ed, he said that he would hope that it wouldn’t do all that at the same time!

Since all I need are the roots, I tried to remove them with my garden shears, but that was not going to happen. I ended up getting the hatchet from the garage and chopping the roots off. Chicory blossoms open and close at the same time every day. It was fascinating the see rootless flowers continue to open and close for four days after the roots had been removed.

Anyway, my plan was to chop up the roots, roast them, and then grind them in my spice mill/coffee grinder. Chopping up the roots was a little harder than it looked, and to make an already long story short, I enlisted Ed’s help. Between him, I, and the food processor, we finally got it ready to roast.

all clean and ready to chop

Roasting chicory smells wonderful! Katherine asked if I had something chocolate in the oven. She was disappointed to learn it was the chicory. Once it cooled, I ground it in the spice mill and put it in a repurposed honey jar. 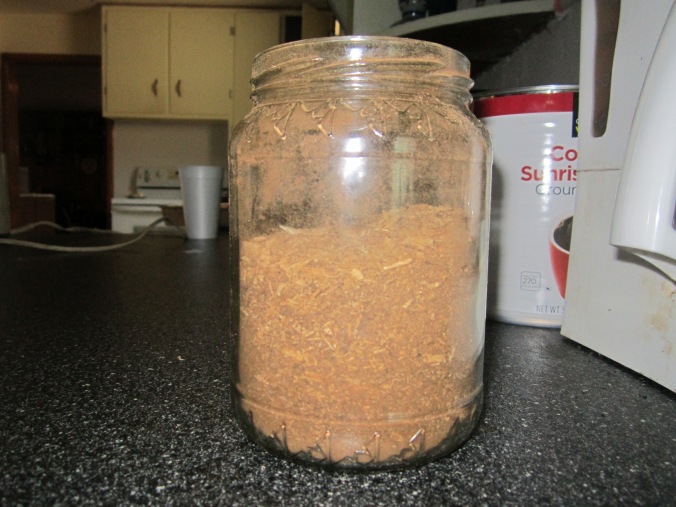 I made Katherine a cup of chicory tea, but she wasn’t impressed. She said it smells a lot better than it tastes. Out of curiosity, we made a pot of straight chicory in the coffee pot. It was ok, but not something I would want all the time. However, adding a tablespoon or so to a pot of regular coffee adds something that I can’t quite describe.

Yesterday morning, Ed noticed the chicory jar is nearly empty, and asked me if I was ready to go dig some more.

One thought on “Chicory on the Homestead”