My daughter is a Visual Spatial Learner.

That means her thoughts come to her in images rather than words. She “thinks in pictures”. She needs time to “translate” what she hears into images so that she understands what you mean…that takes time.

It means she has a poor concept of time, but an excellent concept of space.

It means she struggles with handwriting, but is a talented artist.

It means she has no organizational skills.

It means if she has been somewhere once, she can easily find her way back (she could do this at three).

It means that her ability to learn from you depends on whether or not she thinks you like her.

Here is the article that I found about 18 months ago that opened my eyes to the true nature of my daughter’s educational issues, and eventually lead me to home school her.

I wanted to explain that because when I write about her, I think it will help you to understand how she thinks and why she does things like she does. It might also help you understand why I do some of the things I do.

Katherine loves technology. She loves gaming, making videos and computer animation. She has a laptop, a Kindle Fire, and the newest iteration of the Nintendo DS. Most of these have come as birthday/Christmas gifts from her father. I did suggest the laptop however, because it comes in handy for school. As long as she does her chores and turns everything off and goes to bed when I tell her, she can play, talk and create all she wants. Yes, I do monitor where she goes and we have discussed internet safety in depth.

A few days ago, I told her to clean her room, and put her clean clothes away. I had noticed the same clean clothes from last weeks laundry were still on her dresser. I make sure that I never tell her to do more than two things at a time because of the translation lag. Then I usually ask her to tell me what I said so that I know she understood me. You would not believe what she has thought I’ve said before.

Anyway, the room was not getting cleaned, so I had to pull out the big guns. Unplug for the day. No computer, DS, anything. Then there will be plenty of “time” to clean the room. She was not happy, but she didn’t argue.

Then the fire radio went off. She and Ed have both become volunteers for the local fire department. Kat is a junior volunteer, of course. They were needing people to show up for a work day. She wasn’t crazy about going, but as much as I needed her to clean her room, I also needed her to understand that when you volunteer to help with something, you need to follow through, and give it your best. This time, the room would wait.

Ed was outside cutting grass, so I went out and told him about the fire message. I knew he had to go to work that afternoon so he wouldn’t be able to stay over there and help, but he could take Katherine over there. That is what he did. It is less than I mile from the firehouse, so she would be able to walk home when she was finished.

Five hours later, my dirty, hot and tired child came back home. She didn’t have to walk. They brought her home. She said that she, the fire chief and a friend of ours from church were the only ones who showed up (then I was really glad I had made her go), and they did a lot of work, she was really tired, and her new tennis shoes were dirty!

I told her we would postpone the unplugging until the next day, and I would unplug too.

She looked grateful and went to take a shower. During the course of the evening, she told me about her day, and even though she was tired, I think she enjoyed it. Ed heard from the chief later that she did a great job.

Saturday morning, I got up, notified my facebook friends, my sons, and other members of the blogging 101 class I’m taking, that I was taking the day off, and shut down my computer.

My first plan had been that I would get Kat up early, and get her going on her room so that she would be done by the time Ed went to work. That way, she and I could spend some time in the kitchen, and maybe do some kind of crafty stuff later in the day. Most of all, we could just spend some time “hanging out”.

One of Murphy’s Laws of Combat says, “No plan survives the first contact intact”.

First of all, Ed and I both slept in later then we normally do and it all went down hill from there.

Let me add something here: We have been reading “It Starts With Food” as a family. The reason we are doing that is that is the only way I could think of to get both Ed and Kat to read it in time for us to actually start implementing it in this decade. The book is the first step in the Whole 30, which is a method to change the way you eat and think about food. You can read more about that here. I imagine there will be many posts about this in the future, once we actually start the program.

Just so you know, there are currently no affiliate links on this site. When there are, I will let you know.

Normally, we try to have breakfast or lunch all together so we can read after the meal. That didn’t quite happen, but we did read a section in the book, and Katherine moaned her normal “I’m going to die!”. However, I think she is starting to see the connections discussed in the book, she just doesn’t want to admit it.

Anyway, I sent her in to make her bed first. In the meanwhile, I am working on purging our kitchen of Whole 30 “non-compliant” food. I’m doing that by using it up. I had a ton of colored sugar that I had made myself. It needs to go, but I didn’t really want to throw it out. I had read how you could make powdered sugar in a food processor or blender, so I thought that would be the way to go. I probably need a more powerful blender but it worked out okay.

Kat made her bed and came back out to me. We mixed the batter for home made Oreos. It needed to chill for thirty minutes, so I told her to go work on her room while I washed a few dishes. At the end of 30 minutes not much had been done. I think she was overwhelmed. So I told her to pick up the stuffed animals first, and just put them all on her bed. That was kind of how the day went. We would cook some, and I would give her one thing to do in her room. Then we would cook some more. Her room didn’t quite get finished because I realized that the way it is set up is not conducive to her keeping it clean. We discussed a few different options and discovered we probably need more open shelving and clear containers and less drawers and out of sight storage. There was some progress made.

By the end of the afternoon, we had made home made Oreos, home made oatmeal cream pies, no bake chocolate oatmeal cookies, and blueberry muffins. We had both smelled so much sugar and tasted so much along the way, that we were both about half sick by the time we were done. I think we both ate one cookie. Katherine asked what was for supper (by this time it was about 5 in the afternoon, I think). Supper? She asked if we could go get pizza at the quick shop up the road. We might do that about once a month. We actually have a “buy so many get one free” card from there that is usually on a shelf over the sink. It has the phone number on it. It wasn’t there. Normally, I would have looked the number up on line, but we’re unplugged. So, I showed Katherine how to do it the old fashioned way: we looked it up in the phone book!

It’s about 2/10ths of a mile to the quick shop from our house. That is the beauty of where we live. We are outside the city limits on five acres, but we are a half mile from “down town”. So we walked up and got pizza.

After we ate, we went to check on the dogs and gave them fresh water. I still wanted to do some kind of crafty project with her and one just kind of fell into our lap.

We have a cat named Adora (yes after the “She-Ra” character). Ed calls her arrhythmia because she stays in a state of freaked out. We have both her mother and grandmother, and while they have their own brand of feline insanity, Adora takes it to a whole different level. She is scared of everything. She still hasn’t recovered from James and his dog being here a few weeks ago. She goes from outside, to the basement, stops long enough to eat and then goes back outside. I noticed one day last week, that she was sleeping in the litter box in the basement. After watching for a few days to make sure she isn’t sick, I realized that the basement floor is damp and cold and she just might be laying here because its a better alternative. Ed says it just proves she’s crazy. 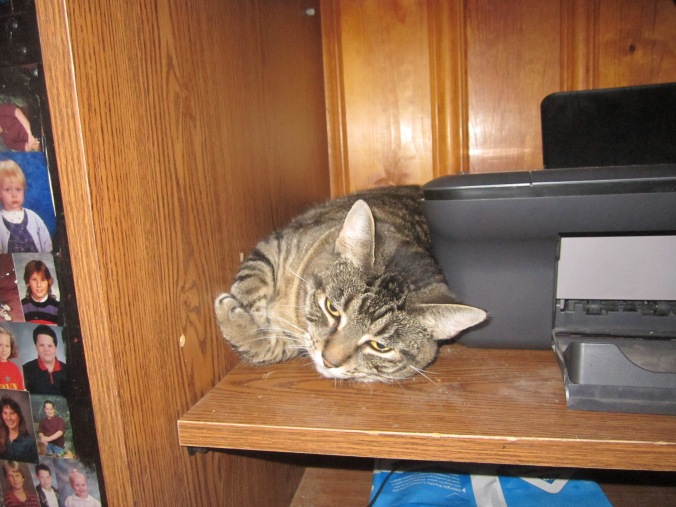 Adora hiding by the printer

Yesterday, Katherine and I discussed making a cat bed to put in the basement for her. I have stuffing left over from another project, and remembered there were two flannel garments in the rag bag. I don’t sew well, and Katherine doesn’t sew at all (yet) and so I thought this would be a good experience for both of us. Since it was for Adora, I knew Katherine would be willing to put in some extra effort. Some time I will write a post about Katherine’s gift with animals.

I told her we probably wouldn’t be able to do it all at once because there would be measuring, cutting, ironing, more measuring and cutting, pinning, sewing and stuffing. She understood. First we took the two garments apart. Then we measured one of Katherine’s bed pillows to get an idea of how big to make the bed. When it came time to cut the pieces we would sew together, I couldn’t find my quilting ruler. At least that is what I call it. I strongly resisted the urge to start pulling everything out of the two closets that holds the majority of my crafting supplies. Guess who else needs open shelving and clear containers?

So we stopped for the night. Katherine created a cave on her bed, with all the stuffed animals, and was sound asleep by 10:00. I really enjoyed the day. I think maybe we will unplug more often.