It was a busy week on the homestead.

We are pretty sure that our property sits on some kind of underground spring, and that, in combination with all the rainfall from the last few months, has left our basement very wet. The water seems to be coming straight in through the cinder block walls. Not good, and not something we can afford to fix right now. Of course there is also the nasty mildew that comes from al lthe water

Most everything we had down there was in some stage of wetness; from slightly damp to soaked through. A few weeks ago, in total frustration, I just started pulling everything out of the basement, except for the washer, dryer and freezer, which are all set up on blocks. It wasn’t all that difficult, because we actually have a basement-garage. The original driveway came from the street up to the garage door which opens to the basement. The main house is upstairs. I simply opened the garage door and started putting everything out in the driveway. Once it was all out, I used a squeegee to push the water into the drains or out the door. Then I hooked up a small fan to circulate the air. A dehumidifier has been added to the list of things we need to get when we have a little more money.

Ok, now that it’s all out, what do I do with it? I can’t just put it back in and I don’t have anything to put it up on to keep it out of whatever new water might come in. While I was pondering this, the rain came back; so we covered what we could with tarps and let it sit.

In the meanwhile, Ed thought we should clean out the other garage; the one that sits behind the house.

It is still stacked with things that were dropped there when we moved in almost a year ago. Since he wanted to move a lot of that to the lean-to attached to the barn, the lean-to would need to be cleaned first.

It had the same problem. When we moved (especially after I got hurt), things were brought in and dropped. Additionally, there were things left from the previous owner(s). I was thinking, “Ok, we can clean this out, move stuff from the garage in here, and then bring the stuff from the basement too.

Because of the weather and other obligations, we took two days cleaning out the lean-to. Then we moved some stuff from the garage. At some point, we decided to use the stalls in the barn as a temporary holding place for scrap and all my recyclables. We are still working on cleaning the garage, and moving things from the basement driveway.

Oh, to make matters even more challenging, the doors on the back yard garage do not work. After some discussion, we decided to see if we could use parts from both doors, to make one work. We had some success. It’s not great, but the door will open and close.

We did find a few interesting “what is it?” type things. Ed’s going to ask some of his farmer friends if he knows what they are. We also found to old cuckoo clock weights  Ed says “You want these, don’t you?” Well, of course! 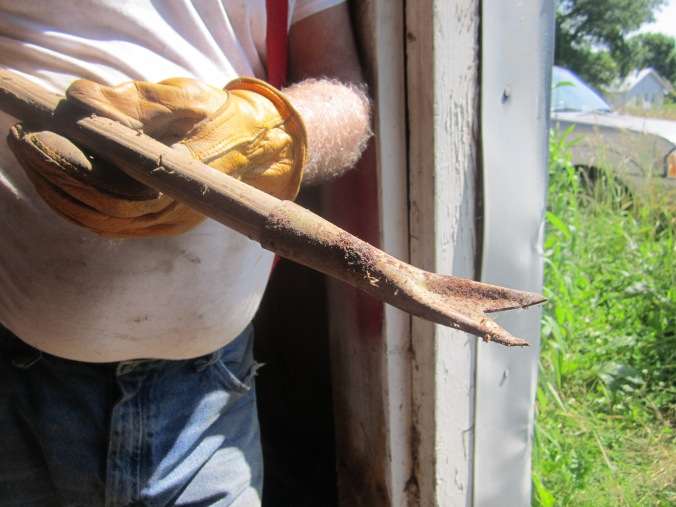 In the meanwhile, we knew my oldest son was coming in from South Dakota for a few days, and I needed to make a place for him to sleep. Additionally, we had friends coming out from where we used to live for an evening of food, fellowship and music. You know what happens when you have guests coming? Well, I know what happens, when I have guests coming. I go into high gear housecleaning. Then there was the cooking.

Did I mention that my son brought his puppy? Kat loved it, but the cats were less than impressed, and Meeko wanted to come play with his new friend. That meant Ed spent three days trying to keep Meeko from climbing the fence, but I”ll let him tell you about that.

In the middle of all the excitement, Ed had a job interview and started a new job at a truck stop about 30 miles from home. It’s less money, but less travel time and less stress too. I can deal with that.

Our friends came out, and the evening went beautifully. We had a nice visit with my son, but by Sunday afternoon, I was ready to sleep for a week!

Now, its time to regroup and get back to the business(?) of homesteading.