The title of this post probably means more to people who remember the postal system as the go- to long distance communications method, with the telegraph and the telephone still vying for second. This was how you started a letter to a friend or loved one with whom you had lost contact. So yeah, I am sorry I haven’t written lately.

I want to tell you that the phrase, “Hey, I got a great idea….” has gotten me into a lot of trouble. Granted, not nearly as much as “Hey guys, hold my beer and watch this….” but still a lot of trouble. The beer is gone, and the daredevil foolishness has followed it, at least, mostly it has. However, hare-brained ideas are no respecter of age or the supposed wisdom that accompanies age.

I was offered a job which paid a bit more than most, and carried with it several responsibilities. I told my dear wife, “I can do this job and keep up my other responsibilities here at the Farm.” Right; when pigs fly.

I took the job in February and, coincidentally of course, our last post to this blog was February. It appears that I am not the hard charging young stallion I once was. So something had to give and I finally remembered what should give. Bye-bye to the high stress job because, as a real live Texas Cowboy once told me, “It’s only money. The horses can’t eat it.”

The good news is that the old folks have still been working on the homestead. We just haven’t had time to write to you about it. Actually that might should be haven’t MADE time, but that is another post.

In February, we had Manic Meeko, the alleged dog, tied up because he had figured out how to out run electricity. Subsequently, we have built them a fenced-in quarter acre or so, where they can run and play. Nothing bothers me more than a dog on a chain; even when I know it is the best temporary arrangement we can make.

Katherine and Meeko in front of an old chicken house that will be a temporary dog house.

Gate post for the new dog fence doubling as a back scratcher.

In the process of setting this up, we came across a plant we did not recognize. Connie is becoming a fairly good self-trained botanist, and has gotten really good at ID’ing plants. Here is a picture of the plant in question. 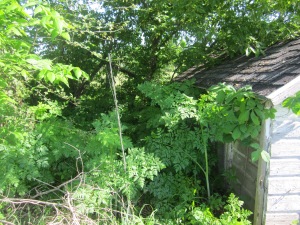 Hemlock which looks like other things except look for the purple stalks and the stalks will be hollow. It can KILL you.

The plant turned out to be hemlock. For those who do not know much about plants, or ancient Greece; when he was given a death sentence in Athens, hemlock was what Socrates drank to kill himself. Here is what it looked like the next day:

That is not the end of it though. I am going to be digging, cutting and rooting this stuff out for awhile. For those who are interested here is a link giving information on identifying Hemlock.

We did get our garden started and here are some pictures of that. We are starting from land that has not been tilled in years so we have good news and bad news. The good news is a good bed of topsoil with lots of organic material in it. The bad news is turning over grass. However, good or bad, here is the start:

Much more has been going on, Connie is making Tin Men and Dogs, Katherine is learning the fiddle, and I am trying to find a little less job than I had before.

Some other little pics just for your enjoyment:

Meeko and Libby’s new best friend, I am surprised they haven’t invited her home for dinner. 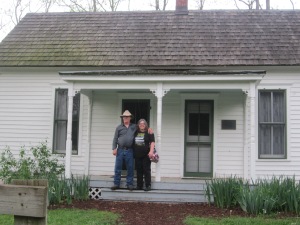 Connie and I on the front porch of the farm where Jesse James was raised.